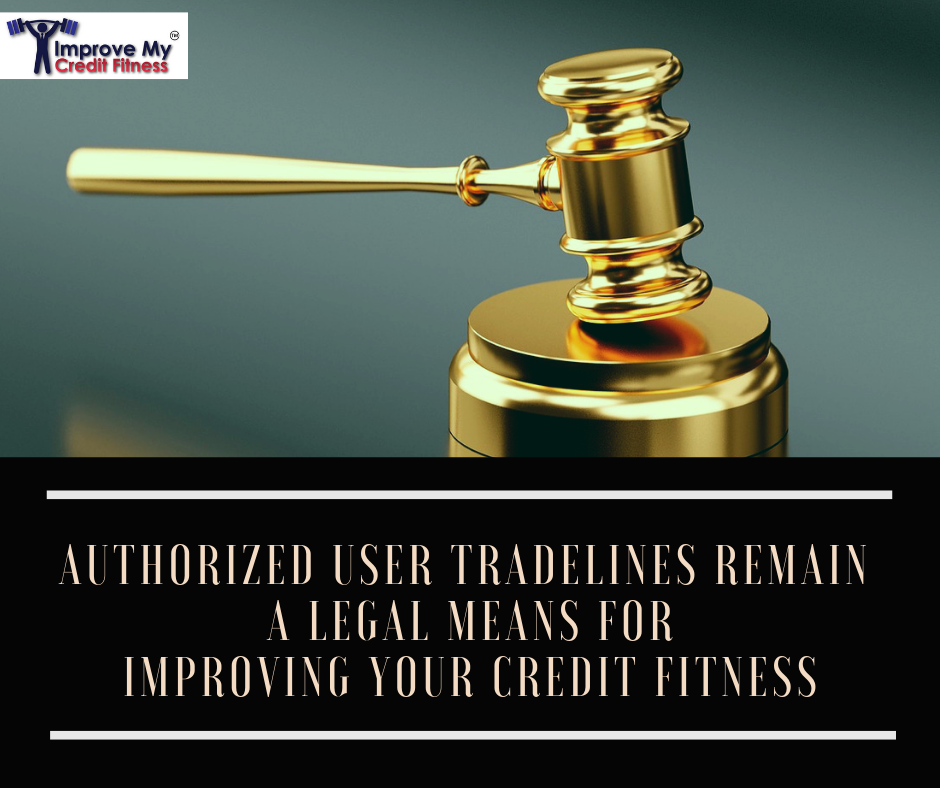 With so many consumers confused about the legality of “authorized user tradelines,” Improve My Credit Fitness wants to set the record straight about how regulators and credit reporting agencies stand in relation to their use. This confusion stems in large part because they were put under the spotlight during the housing market crisis and financial meltdown of 2007-2010. While many people are under the impression that their use was banned as a result of the various banking-related reforms taken because of the crisis, regulators ultimately made no changes in their use. In fact, the use of such tradelines is perfectly legal as long as specific provisions are met when they are added to your credit report. Credit scoring companies continue to accept the addition of authorized user tradelines and the Federal Reserve Board and Federal Trade Commission did not enact any new regulations to prevent them from doing so.

What Is a Tradeline?

A tradeline is basically the specific line-item information about each credit account, with details about the name of lender, type of account, payment status, payment history, and other information highlighting the relationship between the lender and creditor. Credit reporting agencies use tradelines to establish FICO scores and assess credit risk. The addition of authorized user tradelines allows a creditor to “piggyback” on another creditor’s account in order to receive the benefits of that account holder’s good credit. Authorized users receive a copy of that new tradeline in their credit report when the bank or creditor reports to the credit reporting agencies.  For example, when a parent adds children to their account in order to boost their credit when they enter the working world, or when a person adds their spouse in order to boost the overall household’s credit rating.

Who Can Benefit From Authorized User Tradelines?

There are three types of customers that can benefit the most from tradelines: 1- Customers who have little credit history; 2- Customers that are just getting started and have no credit; 3- Customers that might have gone through a rough time and have some derogatory items on their credit report. If you filed for bankruptcy or have had lots of delinquencies within the last two years, tradelines will not help you. Please sign up for a free consultation with us to ensure you qualify.

Creditors have long followed the practice of furnishing credit information about all authorized users to credit bureaus without distinguishing whether or not authorized users are spouses and/or children. Over the past decade, federal regulators have examined this practice to determine both whether such information should be disclosed, but also if authorized user tradelines should be omitted from FICO scoring completely. In 2007, as the mortgage crisis and subsequent financial crisis of 2007-2010 was heating up, Fair Isaac Corp., the developer of FICO scoring, announced that it was going to eliminate authorized user tradelines from its scoring system. However, after consulting with the Federal Reserve Board and the Federal Trade Commission, Fair Isaac decided to retain them, as their omission might be contrary to law.

For their part, regulators determined that omitting authorized user tradelines from FICO would be in violation of Regulation B of the Equal Credit Opportunity Act. Regulation B prohibits discrimination in any aspect of credit transactions on the basis of age, gender, ethnicity, nationality, or marital status. Regulators also decided that the non-disclosure of authorized user status does not violate Regulation B. Thus, no changes were instituted by the government. At the time, FTC spokesman Frank Dorman said that FTC legal staff had determined that technically the addition of authorized user tradelines “appears to be legal,” a sentiment that continues to hold to this day.

The end result as of today is that adding an authorized user tradeline to your credit report is not in and of itself illegal, but if you were to use such tradelines for the purposes of fraudulently obtaining a loan you have no intention to repay then it would indeed be illegal. Such nuances explain why the FTC spokesperson characterizes it as “appear[ing] to be legal,” and why the use of tradelines is authorized by federal regulators and accepted by credit reporting agencies.

To help ensure the legality of the practice, make sure the actual addition of any authorized user tradelines is conducted by a reputable credit repair company, such as Improve My Credit Fitness. Make sure the company handling this for you is bonded with a $10,000 surety bond and that any payment you make will be protected in a trust account as required by Section 817.7005.

—Disclaimer: Improve My Credit Fitness cannot give legal advice and none of the above information should be construed as legal advice.